An important George III Tureen, Cover & Stand made in London in 1773 by Thomas Pitts I, the design attributed to the Royal Architect, Sir William Chambers. 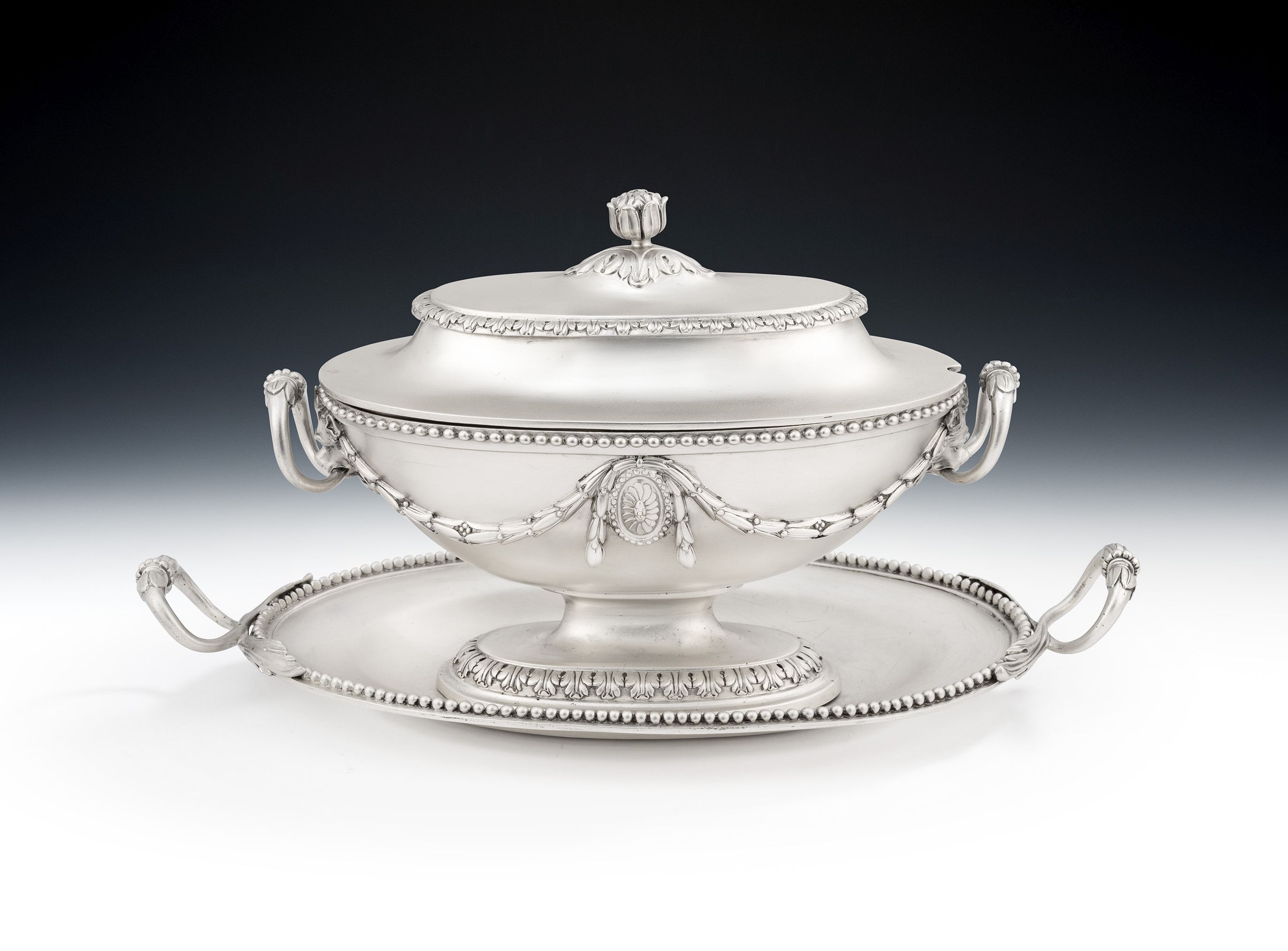 An important George III Tureen, Cover & Stand made in London in 1773 by Thomas Pitts I, the design attributed to the Royal Architect, Sir William Chambers.

Add to Wishlist
Add to Compare

The Tureen is cast and stands on a beautiful oval foot, decorated with acanthus spears.  The boat shaped main body displays a beaded rim, in addition to raised laurel garlands interspersed with Neo Classical oval paterae.  Each side has a detailed lion mask and everted carrying handle decorated with a band of beading flanked by acanthus spears.  The stepped cover rises to a band of acanthus leaves and terminates in a bud finial.  Most unusually, the Tureen sits on a most beautiful oval stand, which rises to a beaded band and carrying handles identical to those seen on the tureen,  The underside of the main body is decorated with raying acanthus leaves.  The Tureen is fully marked on the stand, tureen and cover. All pieces are in exceptional condition and are of a very good weight.

The design was first used by the Royal architect, Sir William Chambers, based on drawings carried out by Chambers' pupil, John Yenn (1750-1821), now in the Victoria & Albert Museum.  The design was first used by Chambers in the 1760's after the 4th Duke of Marlborough employed the celebrated architect to undertake extensive alterations to Blenheim Palace, and Marlborough House in London.  The Duke also ordered a silver dinner service from Parker & Wakelin in this design attributed to Chambers.  Stylistic similarities, as well as the use of heavy swags, can be seen in Chambers' model for a state coach for George III (also in the V & A).  Similarly, the festoons and paterae relate to Chambers' work on the East Gate at Blenheim.  Some pieces from the Malborough Service still survive at Blenheim Palace and other known examples are a Tureen in the Leeds City Art Gallery.

This design is very seldom seen on Tureens, especially with a stand, as very few were made.  Thomas Pitts was a prolific silversmith specialising in the production of Epergnes and Centrepieces.  He had extensive workshops at 20 Air Street, Picaddily, when this fine piece was made.  The quality of design and production is extremely fine.  Pitts was supplying Parker & Wakelin, some of the leading silversmiths and retailers of the period.

Thank you for your enquiry.

We will get back to you soon.

THE FAULKBOURN HALL CASED TEA CADDIES. An important & very unusual pair of George III Tea Caddies made in London in 1793 by William Frisbee. All contained within a contemporary satinwood case, the hinges and handle also hallmarked for 1793.

NEWCASTLE. A George III Sauceboat made in Newcastle in 1774 by John Langlands I.

A very fine George III Wine Funnel made in London in 1820 by John Edward Terrey.

An unusual George III Miniature Chamberstick made in London in 1810 by Emes & Barnard.

An exceptionally fine pair of George III Neo Classical Candlesticks made in London in 1771 by John Carter.

PAUL STORR. An extremely rare George III Chamberstick made in London in 1815 by Paul Storr.

A fine George III Pepper Caster made in London in 1800 by John Robins.

A very fine, and unusual, pair of George IV Salt Cellars made in London in 1826 by William Eaton.