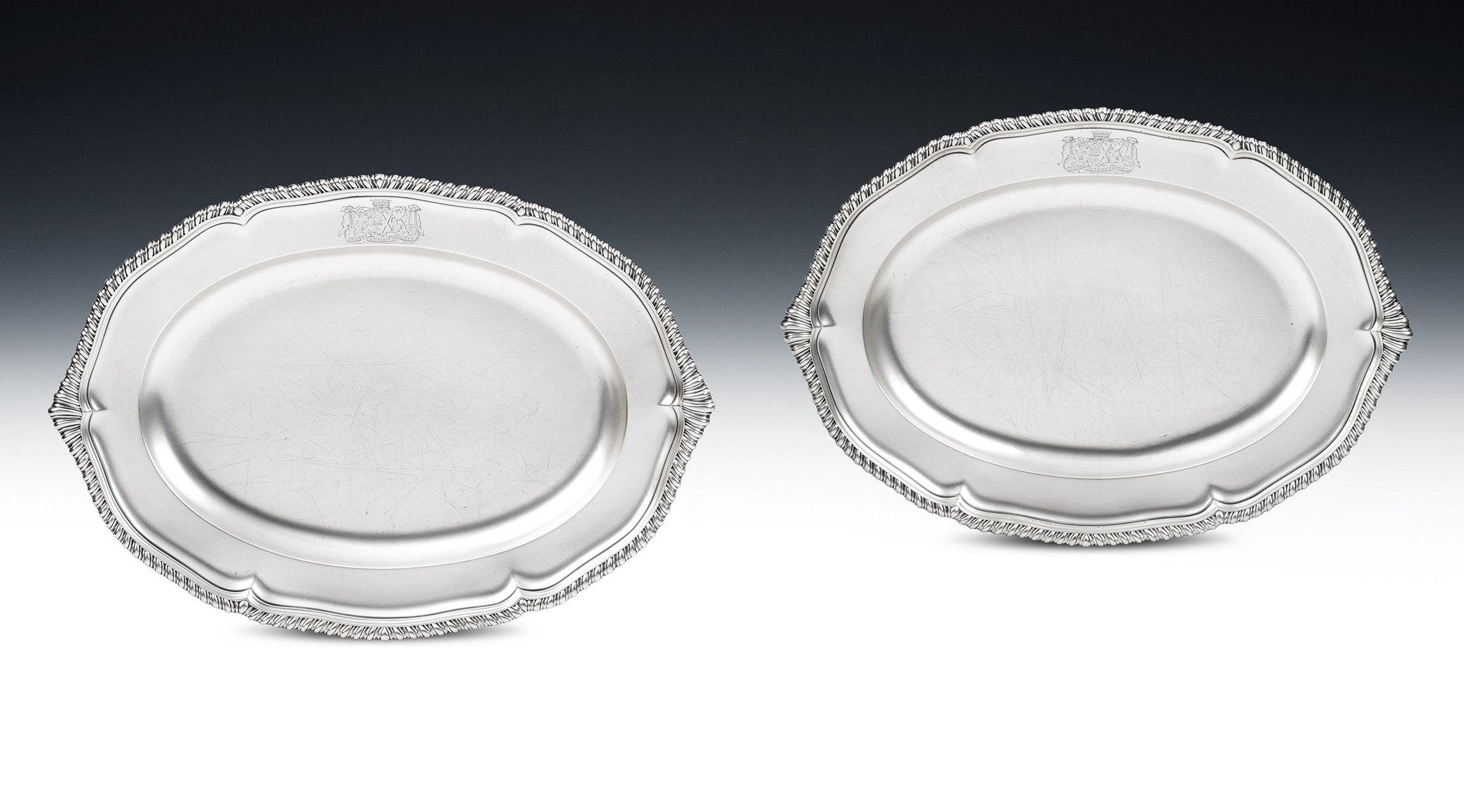 Add to Wishlist
Add to Compare

The Dishes are modelled in an unusual smaller size and each is oval in form with a gadrooned rim, however each end displays an unusual raying shell motif, which can be used for carrying.  The borders are engraved with a contemporary Armorial, with Coronet above and Motto below, all surrounded by a cartouche of drapery mantling.  Each dish is very well marked and is also engraved with its weight and number within the dinner service.

The Armorial is that of Hill impaling Fitzgerald under an Earl's Coronet for Wills Hills (1718-1793), as 1st Earl of Hillsborough.  This was his primary title from 1751 until 1789, when he was granted the Marquessate of Downshire.  He married Lady Margarette Fitzgerald, daughter of Robert Fitzgerald, 19th Earl of Kildare.

Downshire was an important political figure, serving as Secretary of State during the premiership of Grenville, Chatham, Grafton and Lord North.  He steadfastly opposed any concessions to the colonists during the American War of Independence.  He was a loyal "King's Friend" and his prolific acquistion of peerage titles was notorious.  His seat was the beautiful Hillsborough Castle, which is now the official residence in Northern Ireland of Her Majesty the Queen.

Peter Archambo II & John Meure were exceptional silversmiths and Archambo was apprentice to the most famous of British Silversmiths, this being Paul De Lamerie.

Thank you for your enquiry.

We will get back to you soon.

A fine George II Half Pint Mug made in London in 1758 by Thomas Moore.

An extremely fine George II Tankard & Cover made in London in 1733 by John Fossey.

A very rare set of six George II Cast "Falstaff" Teaspoons made in London circa 1750 by Thomas Dene.

A rare pair of George II Hanoverian pattern Sauce Ladles made in London in 1751 by George Morris.

A very fine George II Sparrow Beak Jug made in London in 1737 by Richard Bayley.

THE MORRIS TANKARD. A highly important queen anne britannia standard barrel tankard made in london in 1708 by ambrose stephenson.

NEWCASTLE. A very rare George I Ladys Drinking Mug made in Newcastle in 1721 by John Carnaby.

A very fine George II Cream or Condiment Boat made in London in 1759 by William & James Priest.